Back in January 2017, Josie, an MSF nurse, and Anup, an MSF logistician, began an innovation project to solve a long-standing problem experienced by teams across medical humanitarian field projects.

In our projects, MSF uses Land Cruisers – 4x4 cars that drive well on a variety of terrains. They are multipurpose, which means one Land Cruiser can go from being packed with medical supplies, to loaded with sand and wood, to being used for a mobile clinic or to transfer patients, several times in a day.

Patients will often require life-saving intravenous fluids whilst being moved in the Land Cruiser. Incredibly there is no standard, effective way to hold and stabilise the IV-fluid bags when the car is being used as an ambulance. This means logisticians – the people who solve practical problems in any MSF project – are often called upon to make ad hoc, on-the-spot quick fixes with wire, tape, rubber gloves etc.

These hurried, improvised solutions often result in the fluids bag swinging about, with nurses struggling to view fluid flow and monitor whether the patient is getting the fluids they need. Changing the bag is a nightmare and often the friend or relative accompanying the patient, or even the patient themselves, will end up holding the bag of fluids! Not ideal!

So, Idriss, a former field logistician successfully pitched the problem to an MSF innovation fund called the ‘Sapling Nursery’. The idea was to take this problem out of our medical projects and to take some time and resources to design, test and manufacture a proper system for hanging and securing IV fluid bags in the back of field Land Cruisers.

Idriss recruited a project team, including Josie and Anup. Over a hectic three-and-a-half-week period spent between a design lab in Glasgow and MSF’s training yard in Brussels, Josie and Anup worked tirelessly with Nils, the project designer, and the team at design agency Fearsome to deliver the first prototype.

The prototype is now ready for some intensive field testing to refine the design and make sure it is fit for purpose before pushing it out to real life emergencies in the field. Project phase two has arrived, we reluctantly bid farewell to Josie and Anup, off to pastures new, and I’ve joined the team as a logistician project manager.

I (Tim Hull-Bailey) completed my first mission for MSF in 2016, working as an all-round logistician for the Noma Children’s Hospital in Sokoto, north-west Nigeria and the internally displaced people crisis in Borno, north-east Nigeria. 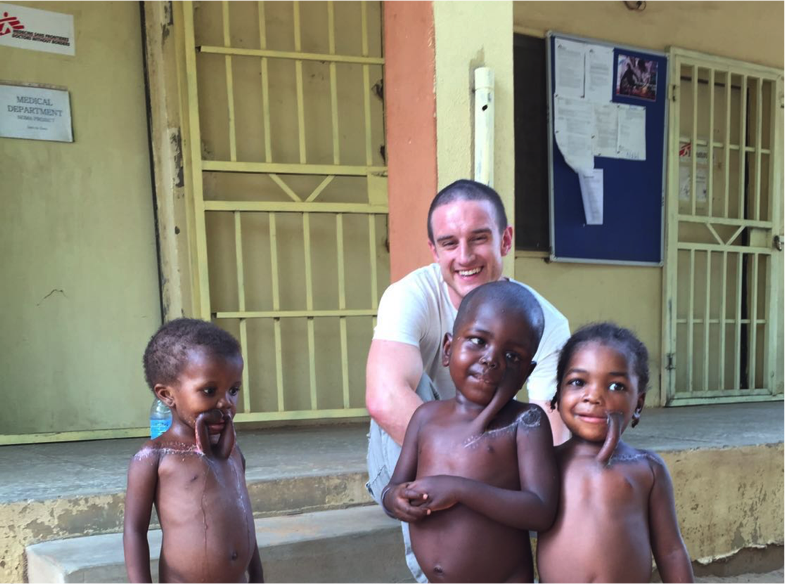 I’d taken almost a year out of humanitarian aid, working on other projects and was starting to feel the itch again to re-enter the sector. I saw the advert for a project manager on the UK MSF Facebook page, read Josie’s and Anup’s blog and thought I’d see if I could help.

After a few emails and phone calls I was travelling north to Glasgow to meet Pete, an MSF Innovation Adviser and Nils, the product designer who had worked with Josie and Anup on phase one, at the Fearsome offices for a crash course in product design and an introduction to the project so far.

Like Josie and Anup, I had my preconceptions about how difficult can it be to design a hook?

These thoughts were immediately dispelled by seeing how much work, trial and error had gone into the project in those early three weeks. I was amazed at how quickly Nils managed to coach me into thinking like a product designer, trying to conceive of every possible scenario, and how valuable he found my opinion and ideas as a fresh set of eyes on the prototype.

To me the prototype looked incredibly robust, one might have even said somewhat over-engineered, but Nils assured me that with some intensive field testing we would surely find shortcomings and design flaws. It was time to get this thing in the back of a Land Cruiser with some nurses, logisticians and patients.

My first task was to organise an intensive day’s testing back out at the MSF training facility in Brussels. The Espace Bruno Corbé, or ‘EBC’ as it’s usually known, is an area designed to replicate conditions in MSF field projects as much as possible, with all the same equipment that MSF uses in the field. It’s managed by Delphine, who as always was super helpful in organising a suitable date for us to steal and modify her Land Cruisers for a day.

The date was set for a Monday in late September. All we needed now were some volunteer nurses and logisticians (who often get called ‘logs’) to test our prototype.

The logs were relatively easy to come by: we coincided our testing day with a log training course and Jean-Eric was kind enough to let us steal his students over their lunch break.

The nurses were more of a challenge; understandably it’s quite a big ask to get people to give up either a day of work or a weekend to volunteer for a project they are not familiar with and might not directly impact them.

Thankfully MSF staff are wonderfully generous people and with a little help with getting the word out around the MSF offices in Brussels, we managed to drum up three nurses from the office. We even got two nurses all the way from Frankfurt to come and test with us for a morning!

With the test planned for a Monday I headed to Brussels on the Friday to check the prototype fitted and we were all set to have a productive day’s testing. I thought I could maybe squeeze a late summer Belgian beer in over the weekend!

The weather did not disappoint, however the prototype wouldn’t fit!

After much sweating and cursing in the back of the Land Cruiser, having removed the roof brace I finally had the prototype installed. It wasn’t as we had hoped, but when I spoke to Nils he was… delighted?!

The fit problem was our first learning point and Nils confessed he was a little surprised it had even fit at all, having made the design from rough measurements and phone pictures!

We were good to go for a full day of testing on Monday, and I finally got that beer...

Is the prototype fit for purpose, or is it back to the drawing board for Tim and the team? Find out in Tim’s next post, here.

All posts from Tim

Chad: A new path, her path